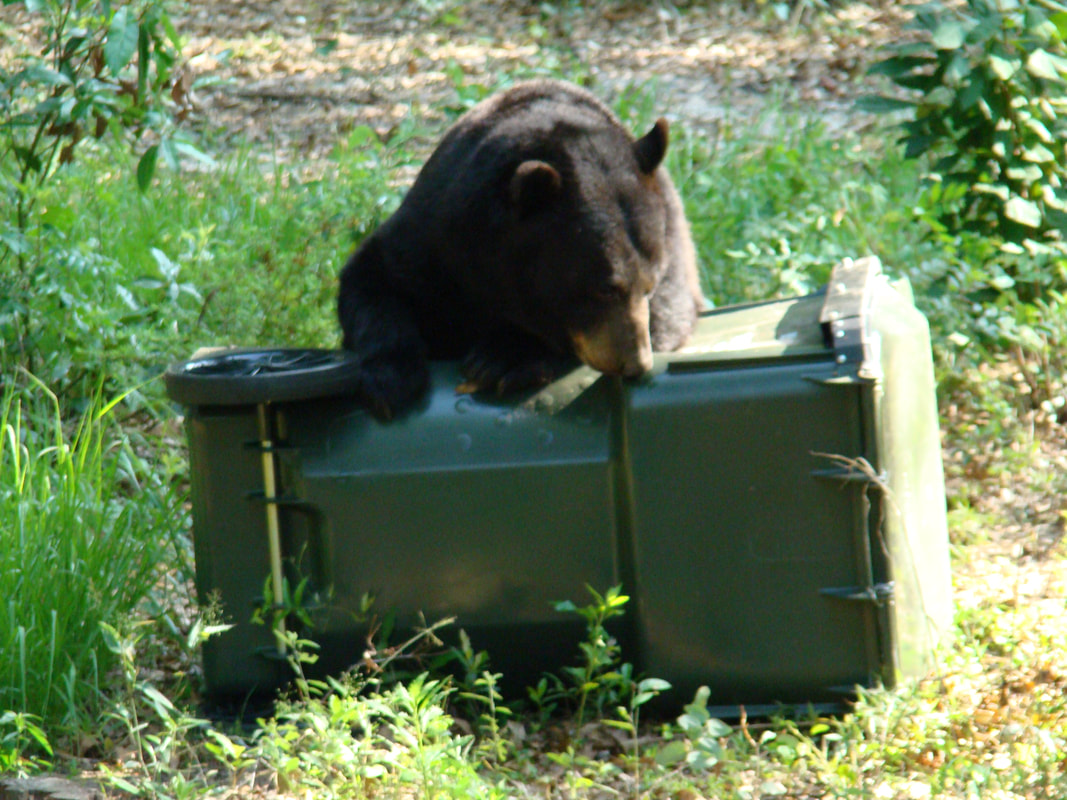 Did you know more than 4,000 bears live in Florida? Following years of state threatened status, the bear population has recovered and continues to grow. Like other Americans who live in bear country, Floridians can also coexist with bears – but only if we take some common sense steps. Doing so will keep each other and our pets safe and let bears stay in the wild. It could also help prevent costly financial settlements for businesses, homeowners, and HOAs if someone is injured by a bear.

The Nose Knows
Bloodhounds have legendary abilities to track down scents. But did you know a bear’s sense of smell may be up to seven times better? The smell of trash can lure them out of the woods from at least a mile away and possibly much, much farther. And your trash is their treasure. Knocking over a garbage can and eating the leftover pizza and food scraps spread across your lawn can save a bear hours of foraging for natural foods. And that means they’ll be back. Sadly, if a bear loses its fear of people, it’s more likely to be struck by vehicles, illegally shot, or killed by wildlife managers if it presents a threat to people. Simply put, fed is dead and is just one of the consequences of luring bears into our neighborhoods.

Being good neighbors means knowing what is best behavior for both bears and people. It’s best to secure trash in a bear-resistant trashcan. Or you can put it in a garage or other protected storage like a secure shed. Then wait until the morning on trash pickup day to put the garbage and recycling out. By keeping our trash secure all the time, we avoid luring black bears into our neighborhoods with the promise of an easy meal.  That means bears are less likely to encounter people and pets - or do property damage.
Spare A Bear
If you see a bear starting down the path to losing its fear by coming in for garbage or other attractants, call your regional FWC office. (TIP: Program that number in your phone now.) Florida Fish and Wildlife Conservation Commission (FWC) biologists may be able to scare the bear and teach you methods to dissuade bears from hanging around. By reporting early, the bear can be taught to stay away.
How FWC Responds to Conflicts: Don’t Wait Until It’s Too Late to Report
The FWC addresses human-bear conflicts in a variety of ways including providing technical assistance over the phone, conducting an in-person visit with the resident, using deterrents (such as an electric fence), attempting to scare the bear away, or, in rare cases, attempting to trap the bear.  While most conflicts can be avoided by securing attractants, biologists assess each situation on a case-by-case basis and use FWC policies and guidelines to help decide on the most appropriate response.  The earlier the FWC is notified, the more response options are available. The longer a conflict situation continues, the more likely the bear will develop behaviors that present a risk to public safety, such as entering a dwelling, harming a leashed dog, or injuring a person.
Once this happens, it is too late to try to change the bear’s behavior and it must be humanely killed. You’ll spare that bear and make a biologist’s day by calling because they dedicate their careers to these bears and have the heartbreaking job of putting down bears that people didn’t report in time.

Want to Understand More?
An excellent resource is the official Florida Fish and Wildlife Conservation Commission's information on living with black bears. Also learn about becoming a BearWise community. You can even find plans to build a secure caddy for your trash if you don't have a garage and other useful information about managing bear attractants.